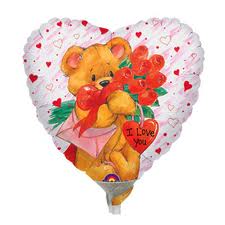 For those of you that have read my Face Book Note on the “Aluminum Helium Filled Teddy Bear Balloon” , this is an update.

It has been 16 days since this  Aluminum Helium Filled Teddy Bear Balloon tried to intimidate me, and I can say that although his strength has dwindled, his will is surviving. I admire him for never giving up.

He has already outlived a normal Aluminum Helium Filled Teddy Bear Balloon’s projected life expectancy. And during these 16 days, he has unceasingly attempt to torment me. Reaching out and attempting to entangle my leg with his tethering string in order to get me to drag him around the house.  Attacking from the doorway as I passed by.  Attaching himself to the Apartments Heat Intake Vent in order to disrupt the flow of warm air during the night, and taking full advantage of the static electricity build up in my thinning hair to jump on my head.  He even once employed the dog, by attaching his tethering string to his tail in order to hitch a fee ride into the living room only to release himself next to where I sat, perhaps  in order to taunt me!

Yet in the game of possessing the heart of the one we love, we had come to a point of honor and respect of each other. Neither of us would back down.

And one last time, Aluminum Helium Filled Teddy Bear Balloon, with dwindling strength made one last attempt to, once again, continue the chase that started the whole story. I admire him for this. Although he is still with us, I will see that my old Rival passes on comfortably. Although, I suspect that his strong spirit my have one more attempt to challenge me.

This entry was posted in Humor, Relationships, The Games We Play. Bookmark the permalink.